Various members of the Warhol entourage have offered reasons over the years for the genesis of Interview. Gerard Malanga, for example, has told interviewers it was because they wanted to go to parties. But of course, the Factory already had more party invitations than it could handle. On one occasion, as a matter of fact, I collected a sheaf of invitations that Andy agreed he wouldn’t be accepting and went to the parties myself, allowing me to devote one of my monthly High Times columns to “The Parties Andy Warhol Didn’t Go To.”

The way Interview began was with one of the occasional phone calls Andy made to me in which he — once again — was bitching about how Hollywood wouldn’t give him a million dollars to go out there and make a movie. Off-handedly I said, “Well Andy, all my friends publish newspapers; why don’t you produce a paper?” It was met with a noncommittal grunt, but ten minutes later Andy called again. “What kind of a paper?” he asked in that querulous, uncertain voice.

I remember telling him that a film paper would be an obvious choice and offering to put up the typesetting (via my wife’s Ambertype, which was already providing the typesetting for many of Manhattan’s underground papers). Typesetting and printing bills would be about equal, I said, and thus we could share ownership of the paper. At the time I was busy producing Other Scenes, a semi-radical tabloid I had begun a year or two previously, and as my travel writing job was still necessitating regular trips to Japan and Greece I was too busy to even think of getting involved editorially.

But I did suggest that he follow the example of Art D’Lugoff’s Village Gate and call the paper Andy Warhol’s inter/VIEW (he had come up with that title). No, he replied, he didn’t want his name on it, nor did he want it printed in color. What style would the paper follow? I asked, figuring that anything Andy came up with would be imaginatively innovative. “I want it to look like Rolling Stone ,” he said determinedly, to my surprise.

And thus Interview was born and Andy began to carry a tape recorder with him everywhere.

—Excerpt from Manhattan Memories, by John Wilcock on how Interview magazine began. 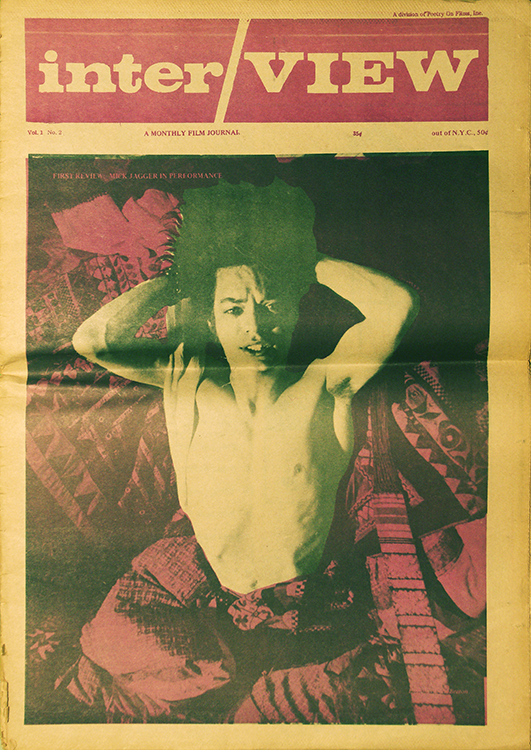