My lengthy relationship (platonic) with Betty Pepper, which began in Greenwich Village, continued until she died a few years ago. In the mid-Sixties, she left the city to live upstate in the woods around Pine Bush. Amber and I used to rent a place nearby for a week or two every year, helping to assemble the next year’s Witches Almanac. But when she and Martin, her husband, moved to Newport, R.I. most of our communication was by mail and telephone. Barely a week or two went by when we weren’t in touch. “I found the piece about Eleusis you had done which I’d like to use. I’ll send it off to you for additions or corrections” and “You definitely improved the intros and I agreed with the changes — one exception, I used ‘tender’ as a verb. But if you misunderstood so will others. Clarity above all” were typical of her annotations. “Please tell me your reactions to the new almanac. Any thoughts, ideas, improvements. Do say something!”

My job as co-editor for 30 years was also to produce at least one 1,000-word piece for every issue (Lafcadio Hearn, the Venus de Milo mystery, Sasquatch legends, Chichen Itza) often from some foreign land that I had visited in connection with my travel writing chores. I also produced, under my pseudonym Oliver Johnson, the book’s opening column Today & Tomorrow — about a dozen items related to magic or paganism in one way or another.

Together Betty and I co-authored two books, Magical & Mystical Sites for which I visited the ‘magical’ places in nine European countries (see chapters 17 & 18 of Manhattan Memories) and Seasons of Being, a compendium of hundreds of quotations (boiled down from 200,000 we assessed) which were presented in the form of a complete life — with appropriate quotes for its spring, summer, autumn, and winter — or a year in one’s life. For both Betty assembled all the artwork. 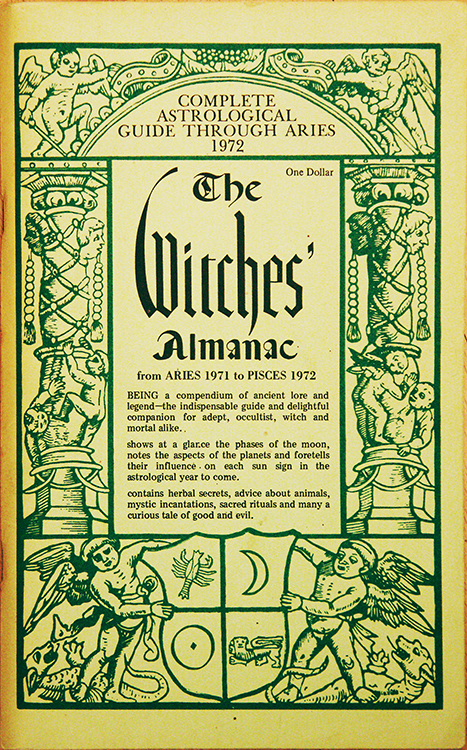